Leprechauns are said to live alone, as do the fearsome banshees, but Irish folklore tells us that some kinds of fairies live together in large, merry “troops.” 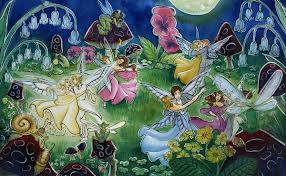 The trooping fairies live in bushes and in circles of stone that can be found all over Ireland. These circles of stone are called fairy raths, and they are the remains of ancient buildings. Most farmers don't like to disturb them because they've heard tales of revenge from the fairies that are supposed to live there. 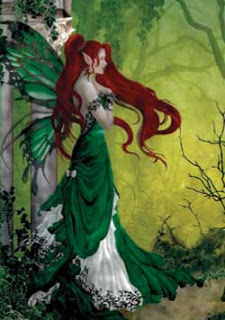 Some of the trooping fairies are said to be beautiful—the sort of long-haired female forms most of us think of when we hear the word “fairy.” We are told that they drink milk and honey and flower nectar, and that they love music and dancing—but also pulling pranks!

Maytime (the first week of May, especially) is supposed to be the most active time for the fairies. They sometimes cast fogs onto travelers, to confuse them, and they even go so far as to move familiar landmarks so that people will get lost. (“Wait a minute, didn't that mountain used to be over there? And—hey, who moved the old alder tree?”)

Most modern Irish people do not believe these folktales, and they rush about during Maytime doing their normal activities. And they are none the worse for it! But some Irish people are still a bit superstitious. They like to stick close to home in early May, just in case.

In the olden days, Irish people who HAD TO travel during Maytime would often wear their coats inside out, to confuse the fairies. I am not sure why an inside-out coat would confuse a creature who can move landmarks around just as a prank...but folklore isn't known for its logic, is it?

Irish folklore is full of “wee folk.” It's not just leprechauns and banshees and beautiful trooping fairies. There are also hairy grogochs, headless horsemen called Dullahans, human look-alikes called changelings, and the horrifying, shape-shifting pooka! Oh, I almost forgot! There are also merrows, which are a bit like mermaids. 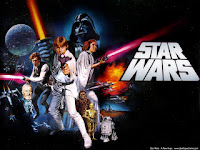 Happy Star Wars Day – May the Fourth be with you!

Check out my Pinterest boards of May holidays, historical events in May, and May birthdays.

Greenery Day in Japan
Posted by Cathy at 12:30 AM