January 31 – Anniversary of the Founding of Milwaukee 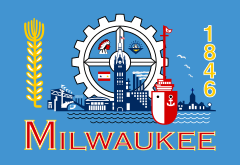 I read that Milwaukee formed, on this date in 1846, after the Milwaukee Bridge War.

I wondered, “Wait? The Milwaukee Bridge War? It wasn't about bridges, right? It was...a battle on a bridge? Maybe?”

Well, to some extent, it was about a bridge (or two or five!). 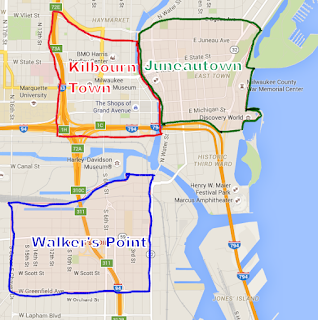 You see, back in the early 1800s, there was no city of Milwaukee (Wisconsin). Instead, there were three settlements on the Milwaukee River. Solomon Juneau started Juneautown on the east side of the river way back in 1818. Some sixteen years later, Byron Kilbourn started Kilbourntown on the west side of the river, and George W. Walker started Walker's Point to the south of the other two settlements.

Even though Juneautown had been in existence for more than a decade when Kilbourn founded his settlement, he didn't pay any attention to the street layout of Juneautown when laying out his own town. He even tried to make sure that his newer town was THE town – the one people knew about and used and shipped through and so forth. So, when he drew up maps, he showed the east side of the river being just an unnamed blank space, as if it were just wilderness. And he even lied to people traveling by steamer, telling them that Juneautown was just an Indian trading post.

People traveling across the river from Juneautown to Kilbourntown used ferry boats, but in 1840 the Wisconsin Territory's legislature ordered the construction of one or more bridge. Solomon Juneau helped build a bridge over Chestnut Street, and by 1842 four more bridges were build: one at Spring Street, one at Oneida, one connecting Juneautown to Walker Point, and one Kibourn built across another river.

Kilbourn was opposed to three out of the four bridges, finding only Spring Street bridge to be acceptable to his shipping business.

Several years went by. East-siders were getting upset that west-siders wouldn't help pay for bridge maintenance. Then, in 1845, Kilbourn's favorite bridge was rammed by a ship, and rumors started circulating among west-siders that it had been done on purpose by a ship's captain who had been paid off by the east-siders.

West-siders decided to have their revenge (even though the accident was probably just an accident) – and they grabbed some tools and took down their side of the Chestnut Street bridge.

You know what happens when one half of the bridge is taken down, don't you? 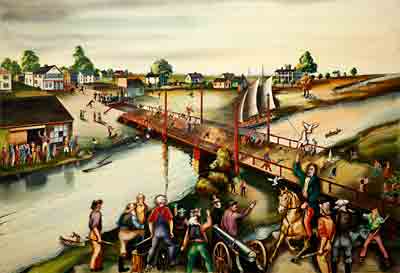 East-siders were mad and gathered up all the weapons they could find – including an old cannon – and prepared for war!

The cannon was aimed right for Byron Kilbourn's house. However, they held their fire when they heard that Kilbourn's daughter had just died.

The next few weeks were tense, but tempers slowly cooled. Eventually, at the end of that year, three new bridges were planned, and a month later the three settlements merged into one new entity called Milwaukee. 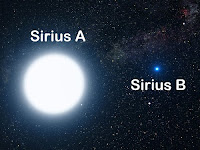 Anniversary of the discovery of a white dwarf

Inspire Your Heart with Art Day

I could ask a bunch of questions with the same answer:

Come on – there is no way that all of those questions could have the same answer! And of course, the secret is, it depends on who you ask... 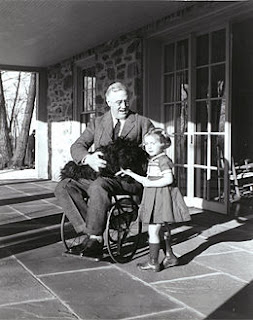 Franklin Delano Roosevelt, who was born on this date in 1882, grew up in a prominent (important) and wealthy family in New York. He went into politics but then was stricken with polio. That illness so weakened his legs, he had to rely on wheelchairs and braces and canes in order to get around. However, his personal victory over polio gave Roosevelt a kind of strength and optimism when faced with difficulties.

And when he won the presidency of the United States, in 1932, he had to face a lot of difficulties! The nation and the world were in the middle of the Great Depression. Later on in his presidency, the world plunged into World War II, and the U.S. was attacked by Japan.

FDR was bold with his depression-fighting policies, called the New Deal, and he radiated a kind of calm positivity in the face of being attacked and entering into the WWII. Those traits are a major reason why Roosevelt won a record four elections (although he died during his fourth term). And those traits are a big reason why FDR often ends up among the top five American Presidents. (On this list – which takes into consideration a bunch of other lists – he is ranked #2, higher than George Washington, even!)

But Roosevelt's bold moves to combat the depression also made the United States into more of a “mixed economy” than it had been, with capitalistic and socialistic aspects. In other words, a lot of jobs and monies were involved with privately-owned businesses and companies and corporations, but a lot of other jobs and monies were based on public programs – everything from government programs to build roads and bridges to government-run schools and parks. Some people with power and money hated that – they complained about high taxes, they complained about “redistribution of wealth,” they felt strongly that those that had money deserved money, and those who didn't should earn it with hard work rather than having any sort of safety net provided by society.

(Of course, a lot of people that don't have money CAN'T earn money with hard work. They are babies, or they face severe illness, or they are 80 years old, or or or...Enough said.) 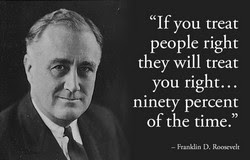 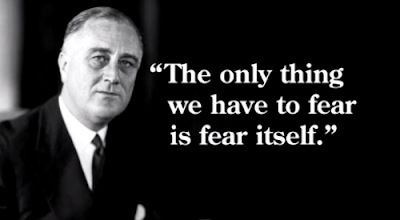 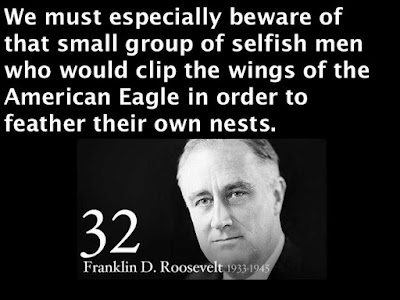 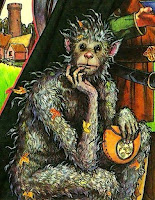 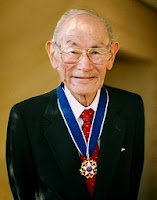 Fred Korematsu Day of Civil Liberties and the Constitution

Anniversary of the First Lifeboat 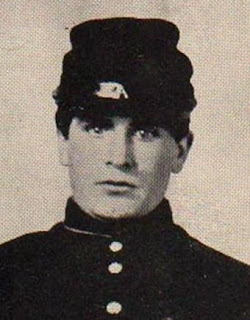 William McKinley, born in Ohio in 1843, served in the Union Army during the Civil War. He was the last president to have served in that war.

He became a lawyer, then a Congressman for the Republican Party. He was voted out of Congress in a landslide, so he ran for – and won – two terms as Ohio's governor. He was elected president in 1896.

Then, as now, everybody wanted America to be a prosperous country, but various people had various ideas of how to make that happen. McKinley thought that a protective tariff and keeping to the gold standard were the ways to build the nation's economic stability. A protective tariff is an extra tax on things that imported into the country, passed in the hope that costlier goods from other countries would make Americans want to buy goods made right here in America. The gold standard is basing the value of money on a fixed quantity of gold. 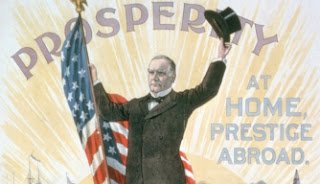 There was a lot of other stuff happening at the time. Imperialistic stuff. Imperialism is the attempt to extend a nation's power over other countries, generally over more, and more, and even more countries, generally through military force. And in the case of McKinley, we're talking about the Spanish-American War of 1898, in which America backed nearby Cuba against Spain's rule – but then, as a part of the peace settlement, the U.S. took over several of Spain's colonies. Puerto Rico, Guam, and the Philippines all came under U.S. control. Cuba was promised independence, but the U.S. Army remained in control there for a while as well.

We're also talking about Hawaii. The U.S. annexed the independent Republic of Hawaii. In other words, the once-independent island group became a U.S. territory. 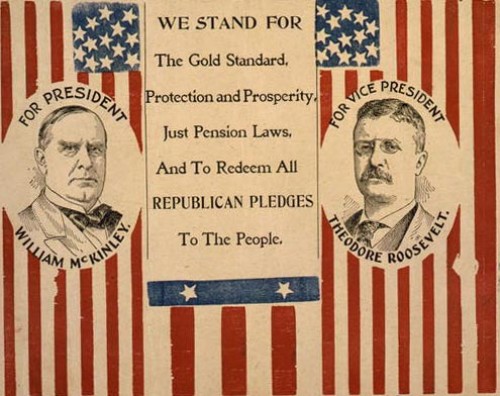 Most Americans were fine with imperialism, I guess. After all, America was the winner in the Spanish-American War, and it “won” Hawaii. McKinley won reelection...but six months into that second term, he was assassinated by a Polish-American anarchist.

Assassination tends to make a hero out of a president, and indeed loads of things were named after McKinley.

By the way, note that Guam and Puerto Rico remain U.S. territories, and Hawaii of course has become a U.S. state. However, Cuba and the Philippines did become fully independent. 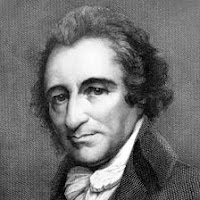 January 28 - Anniversary of a Just Appointment 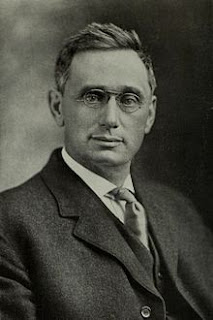 Louis Brandeis was brilliant. He was passionate about the law and about the betterment of individuals and American society. He was incorruptible.
(Incorruptible means that nobody could influence him with power, money, or other bribes.)
Of course he would make a great justice of the Supreme Court, right?
Then why-oh-why did so many conservative Republicans fight against Brandeis's 1916 nomination to the Supreme Court?
Was it because the president who nominated him, Woodrow Wilson, was a Democrat?
A big part of the problem many had with Brandeis was because he was a crusader for social justice – and that often pitted him against monopolies, big corporations, the wealthy and the powerful. Brandeis devoted so much time to public causes and social justice he was called “the People's Lawyer,” and he was even described as “a Robin Hood of the law.”
Of course, we know that standing up against unfair practices is a good thing – even if, actually ESPECIALLY if, the people being unfair are wealthy and powerful.
Still, a lot of politicians are themselves wealthy and powerful, and almost all politicians are influenced by the wealthy and powerful, so Republicans as a group fought against Brandeis because he made a habit of standing up to the wealthy and powerful.
Another big part of the problem many people had with Brandeis was that he was a Jew. Antisemitism (bigotry toward Jewish people) had been a problem in America for centuries, although thankfully it has decreased since World War II and the Civil Rights Movement, in the middle of the 1900s. (I will point out, however, that so far there has never been a Jewish president or vice-president in the United States. There has never even been a Jewish major party candidate for president, and the only candidate for VP was Joe Lieberman in 2000.)
Thank goodness, Brandeis did end up getting confirmed as a Supreme Court Justice. He weighed in on many free-speech issues and right-to-privacy issues. His written opinions on those two topics, in particular, are considered some of the greatest defenses ever written by a member of the Supreme Court. 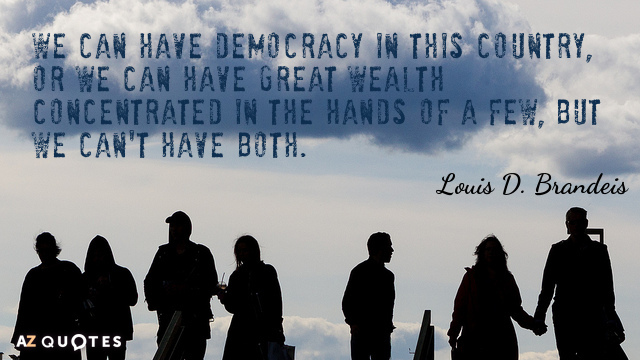 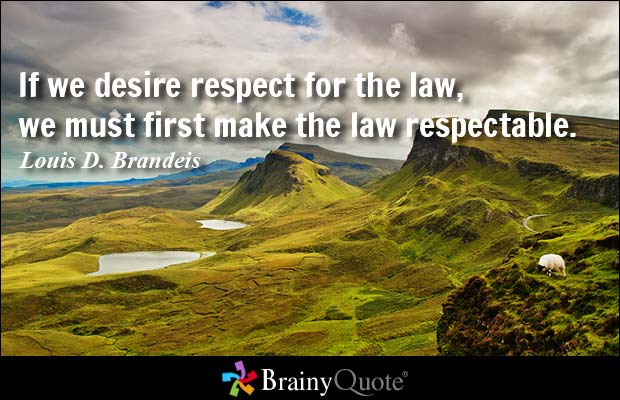 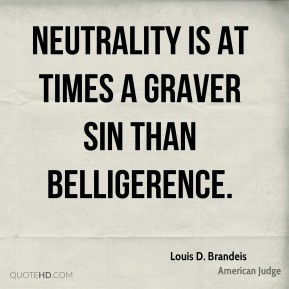 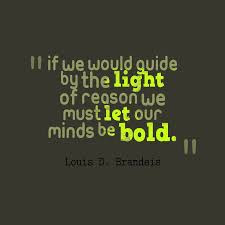 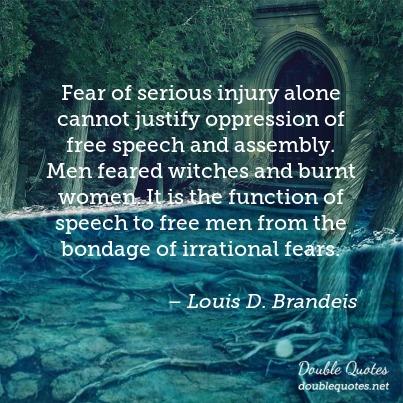 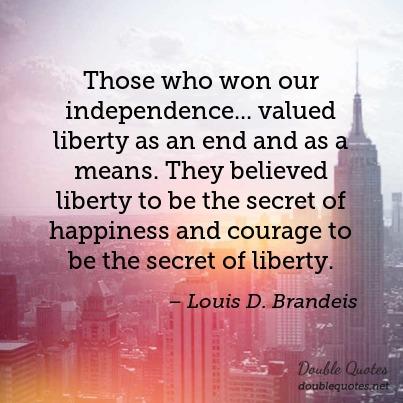 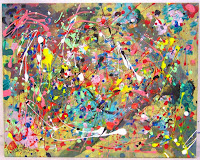 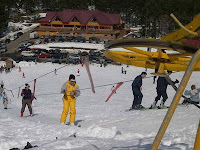 Anniversary of first ski tow in the U.S.

Anniversary of the coining of the word serendipity