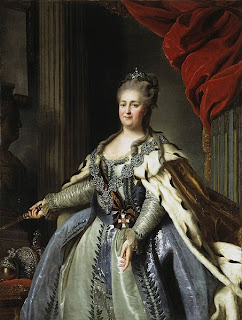 She was the Empress of Russia, the most famous and longest-reigning female leader of that country in its history—ruling for 34 years.


Born on this date in 1729, her name as a baby wasn't (of course) “Catherine the Great.” But you may be surprised to hear that she wasn't named Catherine at all! She was named Sophie Friederike Auguste von Anhalt-Zerbst-Domburg. (Um...wow!)


Also, she wasn't born Russian! Instead, she was Prussian (German), and she was educated by French tutors. Two of her first cousins became kings of Sweden, but Catherine married a man who was next in line to become czar (emperor) of Russia, Peter of Holsetin-Gottorp.

Unfortunately, the marriage was not very successful. From what I read, it seems that almost everyone disliked Peter, including Catherine! Many people who hated Peter admired Catherine.

After the death of the empress of Russia, Peter was crowned Emperor Peter III. Remember, he was highly disliked, but the monarchy goes along bloodlines, not by popularity. Still, it would have been smart for Peter to make more friends—because he only ruled for six months! Then he was murdered, and Catherine was made Empress Catherine II.

(Historians have found no firm evidence that Catherine actually conspired to kill her estranged husband, by the way.)

Russia grew to be one of the great powers of Europe during Catherine's reign. She modernized Russia and encouraged colonization of Alaska. This time is considered the Golden Age of the Russian Empire—and she is called “the Great.” However, Catherine did nothing to help the poor workers, or serfs—as a matter of fact, their lives might have become even more grim during her rule. So to me, she is not so very great.

Catherine the Great once said, “I praise loudly, I blame softly.” What do you think she meant by that? Is this a good idea?