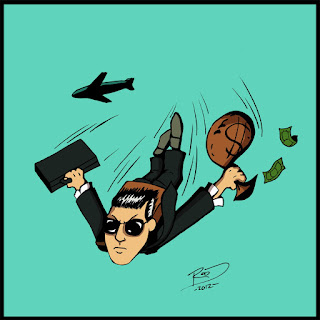 This is very weird for me:

A man the media named D.B. Cooper skyjacked an airliner in order to extort $200,000 in ransom, and he might have died when he parachuted away with the money, but he may have gotten away with it. All of that's unusual (thank goodness), and the case is singular because it is the ONLY unsolved air piracy in American history. But the thing that is so weird for me is that there are Cooper fans who gather together once a year to talk about the unsolved case.

I shudder at the thought of celebrating someone who hijacks a plane!

Although, if you were going to celebrate a skyjacker, D.B. Cooper would be the right one, because he was calm, polite, and he never hurt anyone.

Still, he threatened everyone with a bomb (if it really was a bomb).

At the time of the hijacking, on this date in 1971, there had been no 9-11, there had been no flying planes into buildings and killing everyone on board. At the time, officials generally cooperated with hijackers at least long enough to save the passengers' lives and hopefully the lives of the flight crew as well.

Here's what happened (briefly stated): a man dressed in a business suit and calling himself Dan Cooper bought an airplane ticket at the Portland, Oregon, Airport; he bought a one-way ticket to the nearby city of Seattle, Washington, just a 30-minute flight. When in the air, the man informed a flight attendant that he had a bomb and wanted $200,000 in “negotiable American currency”; he also demanded four parachutes (two primary and two reserve) and food for the flight crew.

The airplane circled the Seattle and Tacoma area while the FBI got together the parachutes and ransom money. Then it landed at the Seattle-Tacoma Airport, and Cooper released the passengers and most of the flight crew when he got the parachutes and the money. The plane was refueled. Cooper told the pilots that, when they took off again, they would fly toward Mexico City, with a refueling stop in Reno, Nevada. He made some really specific demands about flying – wing flaps lowered, landing gear in takeoff and landing position, certain speed and altitude, and so on.
Shortly after takeoff, Cooper told the flight attendant to join the pilots in the cockpit and stay there with the door closed. And shortly after that, the flight crew saw from warning lights that the aircraft's rear exit door was open and its staircase had been extended. A few minutes after that, the crew noticed a sudden upward movement from the airplane's tail section. They wondered if Cooper had jumped out already.

About two hours later, the airliner finally landed in Reno. Of course FBI agents, state troopers, Reno police, and sheriff deputies surrounded the jet and then searched the plane. They were able to confirm that Cooper was indeed gone. Two of the parachutes and a black clip-on tie were left behind.

Of course officials studied the flight path from Seattle toward Reno and began a manhunt to find and arrest Cooper, if he survived his jump. And, as you can imagine, they concentrated their efforts over the spot that the airliner was when the crew felt that tail-section dip. However, the FBI never found Cooper or his body, and they never found the parachute. Also, they didn't find the money (which had been carefully photographed before it was turned over to the hijacker, so that they would be able to track serial numbers if he ever spent the money).

That is, they didn't find the money THEN. Nine years later, in 1980, a young boy was digging a fire pit in a sand bar. He uncovered three bundles of twenty-dollar bills, with their rubber bands still intact. The serial numbers matched the some of the money that was given to Cooper! The money ($5,800) was not found anywhere along the flight of the plane, but of course could have been carried by Cooper or someone else and then buried, or it could have washed down a river before being buried in the sand by natural processes.

But despite years of investigation, enlisting the public's help, quite a few fingerprints found on the tie clip and unused parachute, and all the info given from passengers and especially flight crew, including sketches from the sketch artist – we still don't know who Dan Cooper really was, and we don't know what happened to him.

Oh, and why do we call Dan Cooper (not his real name) “D.B. Cooper”? It was a mistake made by a hurried reporter – but the name stuck in the public's mind. And since one alias is as good as another, D.B. Cooper it shall remain, unless we ever do discover the man's real identity.

Find out more, including all the details that people still debate, at Citizen Sleuths.

Because Cooper hijacked the plane and jumped on the day before Thanksgiving, every year the Saturday after Thanksgiving is the D.B. Cooper Festival. And it is held in the Ariel Store in Ariel, Washington, because this spacious tavern was sort of HQ for the gigantic ground search for Cooper. 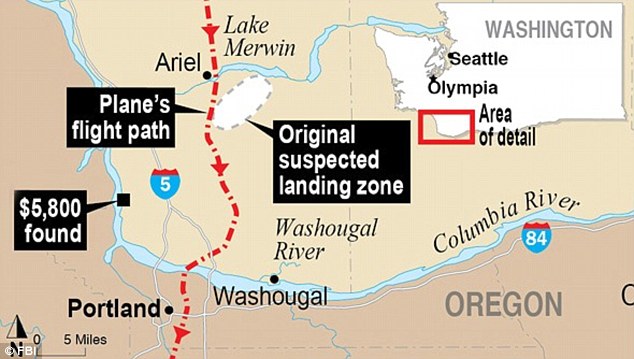 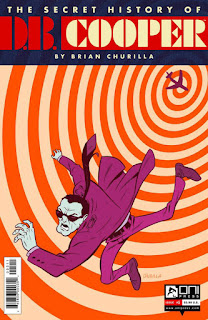 I gather that the FBI still maintains and active case file on the skyjacking. And it is now 60 volumes!!

This air pirate -- who, again, endangered the lives of 42 people and caused a lot of inconvenience and expensive investigations for many, many more people -- has somehow created a cult following. There have been songs, books and comic books, movies, and Cooper-themed promotions in restaurants, bowling alleys, and more... 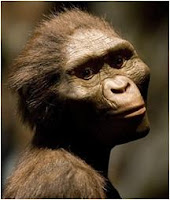 Anniversary of the discovery of “Lucy”

Anniversary of the publication of The Origin of the Species

Anniversary of the first observation of the transit of Venus