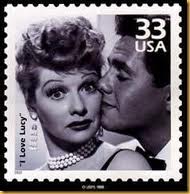 It's the 60th anniversary of the beloved “I Love Lucy” TV show. Stars Lucille Ball and Desi Arnaz broke new ground with their show, which first aired on this day in 1951:

The show was filmed in front of a live audience, whereas most shows at the time had a “canned” laugh track.

The show was filmed with three cameras at once rather than one. This is so that the director didn't have to call for multiple retakes of the same scene (which would have been difficult for a live audience). Even when actors bungled their lines, there usually wasn't a retake—instead, everyone played off the mistake for extra laughs! 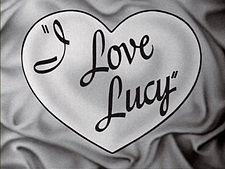 Desilu (Ball's and Arnaz's production company) pretty much invented the rerun. When Lucille Ball gave birth to Ball's and Arnaz's two children, she needed a little time to recover before going back to work. So episodes of the show that had already aired were aired for a second time – and, it turns out, were very popular.

Speaking of popular, “I Love Lucy” was the most-watched show of its time and ended its run at the top of the ratings. It won five Emmy Awards (and was nominated many more times), it always appears on “Best TV Shows of All-Time” lists, it is still being rerun all over the world, and forty million people in the US still watch it every year.

This montage of famous bits from the show starts with the really, really famous chocolate-candy-factory scene.
Posted by Cathy at 2:30 AM